This display has not been updated since 2018.

When to See It

10,000 individually addressable RGB’s, 3600 Pixel Mega Tree, and the only place to see a 20' tall custom Lombardi Trophy - Lights and Music Galore set to Christmas Music, Philadelphia Sports Fight Songs, Disney, Star Wars - you name it, we’ve probably done it or will do it!

Our light display supports Jared Paynter’s PTSD Campaign. The National Center for Post Traumatic Stress Disorder (PTSD) promotes awareness of PTSD and effective treatments throughout the year. Starting in 2010, Congress named June 27th PTSD Awareness Day (S. Res. 455). Since 2012, the Senate designated the full month of June for National PTSD Awareness (S. Res. 481). The purpose of PTSD Awareness Month is to encourage everyone to raise public awareness of PTSD and its effective treatments so that everyone can help people affected by PTSD.

Add Video This display does not have videos. Capture and upload the first!
Add Review

This display has not been reviewed. Be the first!

Deptford’s Dazzling Lights is decorated by 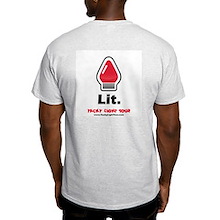